Born and raised in Buttzville, New Jersey until I couldn't take it anymore and moved to Hell, Michigan. From Hell I traveled around the globe, did a lot of shit and now I rule the world from the kitchen table of my house in Bacon Level, Alabama where I'm semi-retired but still stick my nose into things at Booger Hole Welding & Pipe Fitting, where I'm a forklift truck operator, hoist operator, buffer, buffing maintenance tech, town drunk and chief ass kicker.

They’re going to charge Cuomo with a misdemeanor sex crime, but not with anything to do with the nursing home deaths that his orders caused? Sounds like somebody’s been making some deals! 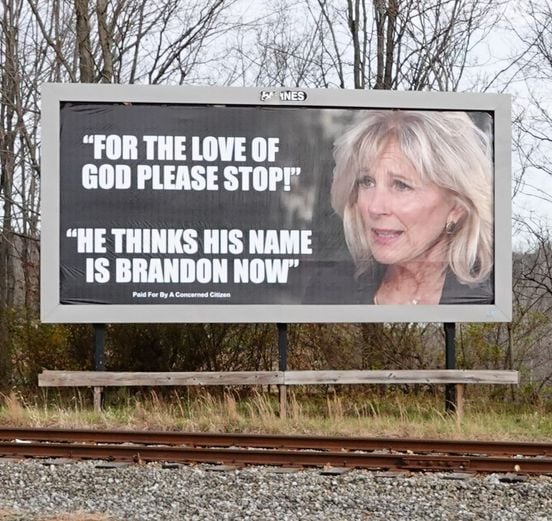 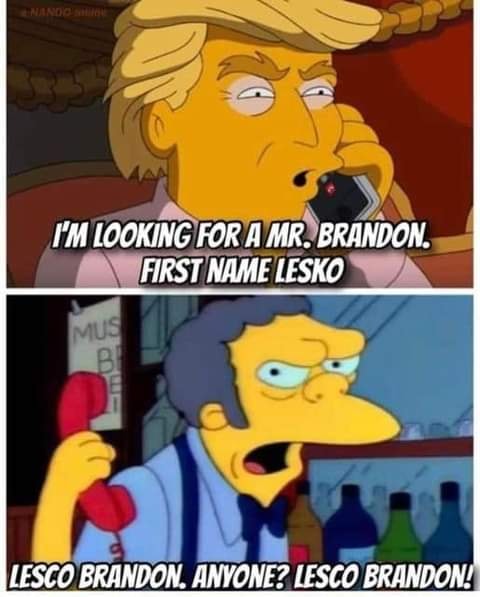 Fauci just called for Ted Cruz to be investigated for promoting violence and inciting a riot!

Print these to drop in the woke red bucket this holiday season in lieu of cash..... 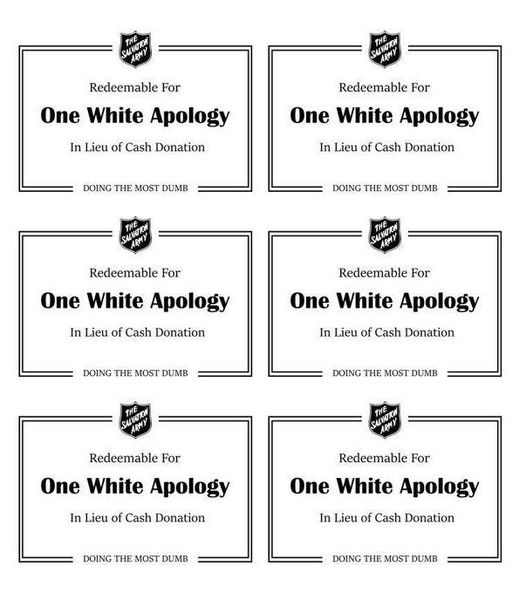 How did the Omicron variant get into Australia if the unvaxxed can't leave or enter?

This is where the narrative falls apart. If people can't see it now there is no hope. We have to stand up once and for all or it will never stop.

And pardon the fuck outa' me for being smarter than the average so called journalist ...........

I say… Get’em kiddo! Take them slandering racist fucks for every penny they have.

I never thought they'd be a bigger narcissistic egomaniac than Barack Obama - then here comes Dr. Fauci to prove me wrong. 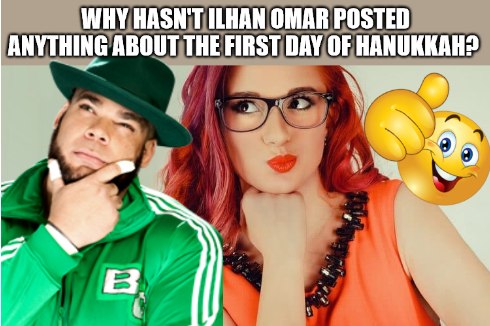 Hey Fauci does your omicron variant have a 99% survival rate too?

Yea, I’ll be at the ball game, the restaurants, and all public spaces maskless if anyone needs me you fucker. 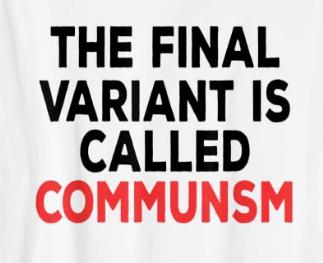 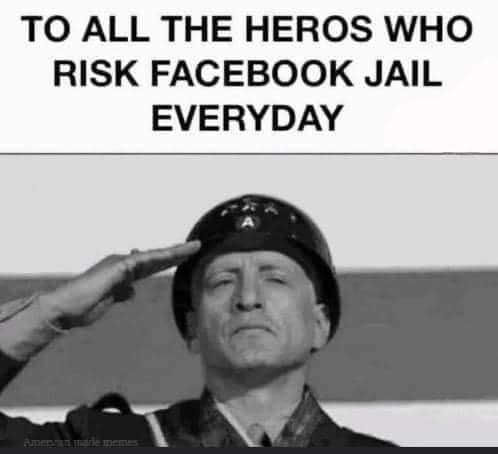 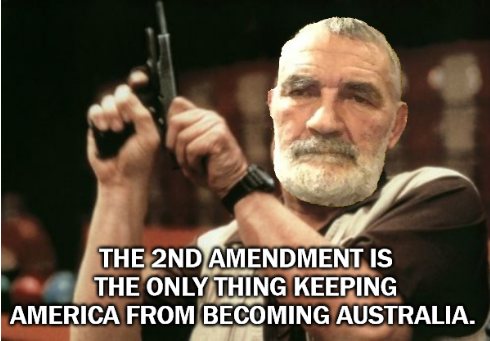 Kamala Harris and Pete Buttigieg will agree to run together in 2024.

Wish I had a good punchline for that joke.

For the first time in history, you can say, “He's a fucking idiot,” and 90% of the world will know exactly who you are talking about. 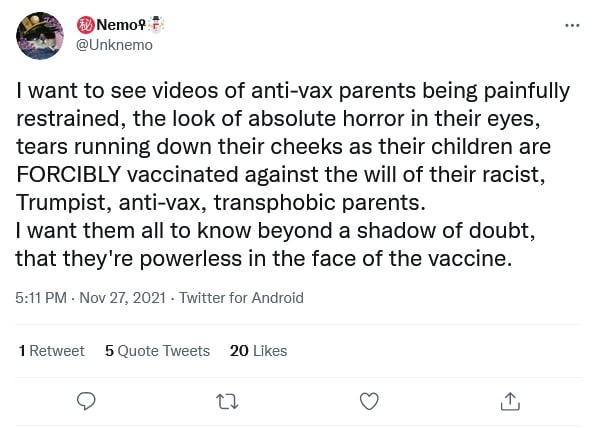 NY Governor Kathy Hochul has declared a ‘disaster emergency’ via executive order despite the new Omicron variant not detected in NY, saying “it's coming.” This dumb broad has lost her fucking mind! 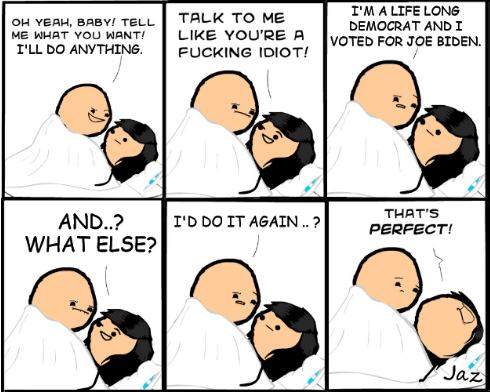 And if you didn't know that already you're a fucking idiot!

That's it for today, Lesko Out!

The Best Meme Ever:

This is the most true meme ever to be made into a meme. 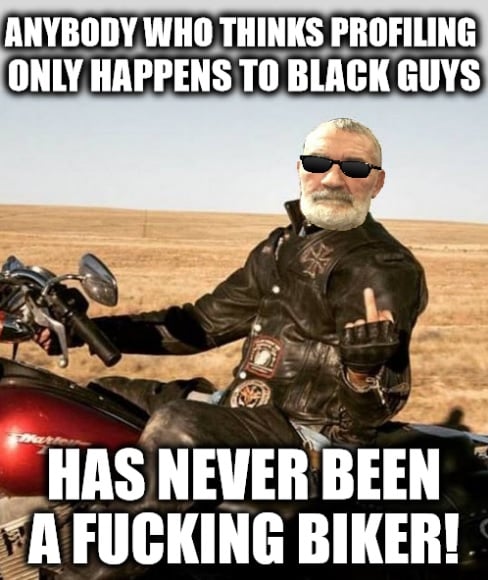 And it's true as Death & Taxes. Back in the days when I rode with the White Line Rebels MC, there was no place I could go where I wasn't profiled by folks.

It didn't matter what the situation, people just assumed I was gonna bust them over the head and rob them and rape their daughter. Every store I walked into I was closely observed by loss prevention until I made my purchases and left.

If I was on an elevator and the door opened before I got to my floor, whoever had pressed the button suddenly decided to take the stairs.

If I was walking down the street in broad daylight, people would cross the street before crossing my path. Then they'd cross back after I was at least half a block away.

And don't even get me started about being stopped by the cops "Riding While Wearing Black." It happened every single day.

But did I complain?

You Fuckin-A Right I complained! But fact is, A: Nobody Gives a Shit, and B: I refused to give in and buy a BMW and start wearing golf shirts. 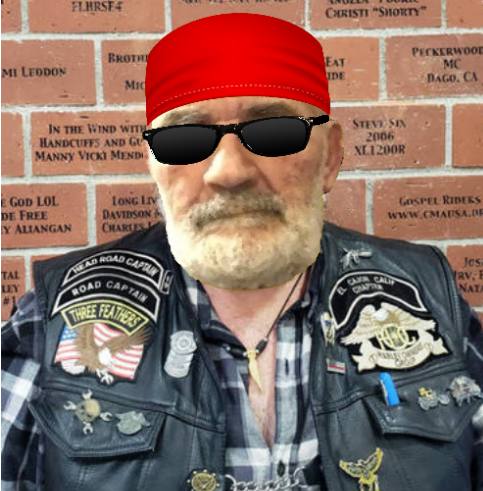 Everybody want's to change their identity these days, what's up with that?

Well, my neighbor Tim tells me it's normal, he says, when you tire of the skin your in you may want to remake yourself in some way.

So what the heck, I guess I can play that game too.

That being said, I no longer identify as a “conspiracy theorist”.

From now on you may now refer to me as:

“That crazy fucker who was right the entire time!”

This is all bullshit, it's as phony as a pair of Kardashian Titties!

These fucking liberal jack wagons, like Bill Gates, have been trying to make us into vegans for fucking years, and this is how they're gonna do it! Artificially inflate beef prices until we got no choice when it comes to protein.

Thanks for nothing Joe, you fucking fuck face fucker!

Speaking of Kardashian Titties, check these puppies out.

Maybe they ain't fake, hell, what do I know?

I kinda wish someone would adapt a movie from Hunter S. Thompson's first book, "Hell's Angels: The Strange and Terrible Saga of the Outlaw Motorcycle Gangs" 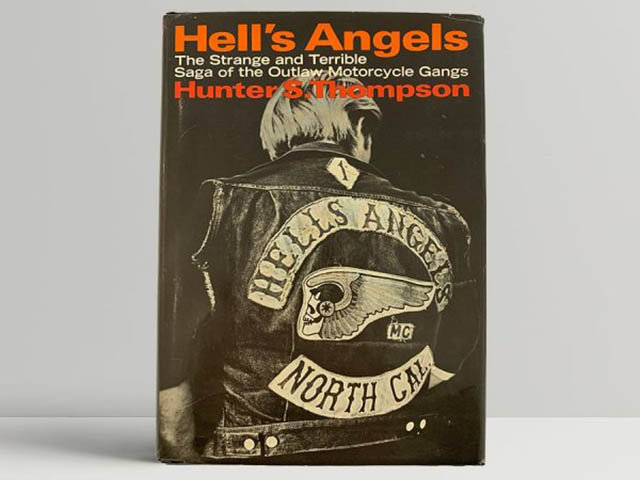 It was one of his best books, it was first a article in some magazine called, The Nation in 1965 and then he made a whole book about the subject and published it in 1966.

If you read that, how in the fuck do you NOT want to read more? You wanna! And it's worth it.

He spent a year with the Hells Angels, in particular the San Francisco and Oakland chapters of the club and their president Ralph "Sonny" Barger. He even got his ass kicked by a bunch of them.

Anyhoo, it would make a great movie so come on Hollywood, get it together and make a movie out of this classic work of non-fiction.

Honestly even in replay mode, Dan Bongino's got the best talk show on the radio.

I was listening on Black Friday and it was a replay but still I was glued to my radio. This kid's got what it takes.

His energy and sense of humor is spot on. And he's not over prepared either, I mean you can tell he reads a lot but he's not sitting there with a script.

He's got passion and intensity and his take on the events of the day coincide 100% with mine, which is weird.

He reminds me of a young Jaz McKay, back in the day when he was on WWWE in Cleveland. Jaz was one of the best talk radio hosts ever.

When he spoke to a bunch of woke pussy's at  Duke Ellington School of the Arts the other day some of these little punks started whining about his exercise of the first amendment.

One student stepped to the mic and called him a “bigot,” saying, “I’m 16 and I think you’re childish, you handled it like a child,” referring to his recent TV special on Netflix.

Ironic coming from a 16 year old.

Dave didn't back down at all, he hit back at kid. “My friend, with all due respect, I don’t believe you could make one of the decisions I have to make on a given day,”

Another student accused Chappelle of promoting or encouraging violence with his comedy. “Your comedy kills,” the student said. The comedian reportedly replied: “N*ggas are killed every day.”

Take your accusations about, "speech causes violence" and shove it up your ass fuck face!

You know what speech causes violence? When that bitch Maxine Waters told leftys to get in the face of Trump supporters, or when Eric Holder said “If they bring a knife to the fight, we bring a gun."

Not one of these clueless punks would ever call those people out for calling for violence on conservatives.

Chappelle stood his ground and I admire him for that, and so should all y'all!

Somebody is gonna have to explain to me how Trumps travel restrictions were deemed to be racist when he did it against China but President Poopy Pants shutting down flights from South Africa isn't racist?

That's a rhetorical question of course, I know why. Because ALL Democrats and brain dead liberal, commie, pinko's are hypocrites and BY THE WAY, can KISS MY WHITE ASS! 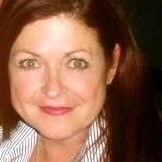 I'm sorry to hear of the passing of my old friend Mary Lou Gunn. She was one tuff chick with a heart of gold.

She was recently living in Fresno, CA managing a bunch of animals at Lotus Radio Broadcasting.

Democrats are the scourge of America and the laughing stock of human history. Prove me wrong.

The new "worst-ever super-mutant" variant is now hitting from South Africa ... just in time for the midterms. More mail-in voting will be needed, to be sure.

Why have more people died in the 11 months since we've had the vax than we did the entire first year when we didn't have a vax?

Do all the people on social media, like Facebook who said Kyle Rittenhouse was guilty and was a white supremacist get suspended for misinformation?

And how about all the people, LIKE ME, who got suspended for supporting Kyle get an apology from Zuckerberg?

How about just a GET OUT OF JAIL FREE card to use on our next suspension?

The Salvation Army is looking for more than donations this year by asking all white donors to "reflect on their racism."

No Shit! They have totally embraced Black Lives Matter and are now working hard to, among other things, “dismantle white privilege” and “disrupt the Western-prescribed nuclear family structure.”

That's it, I'll never do a damn thing to support them, I guess I'll make my donations at Goodwill. 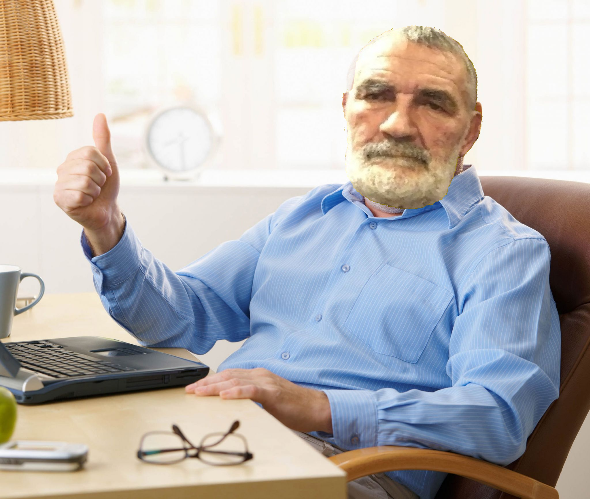 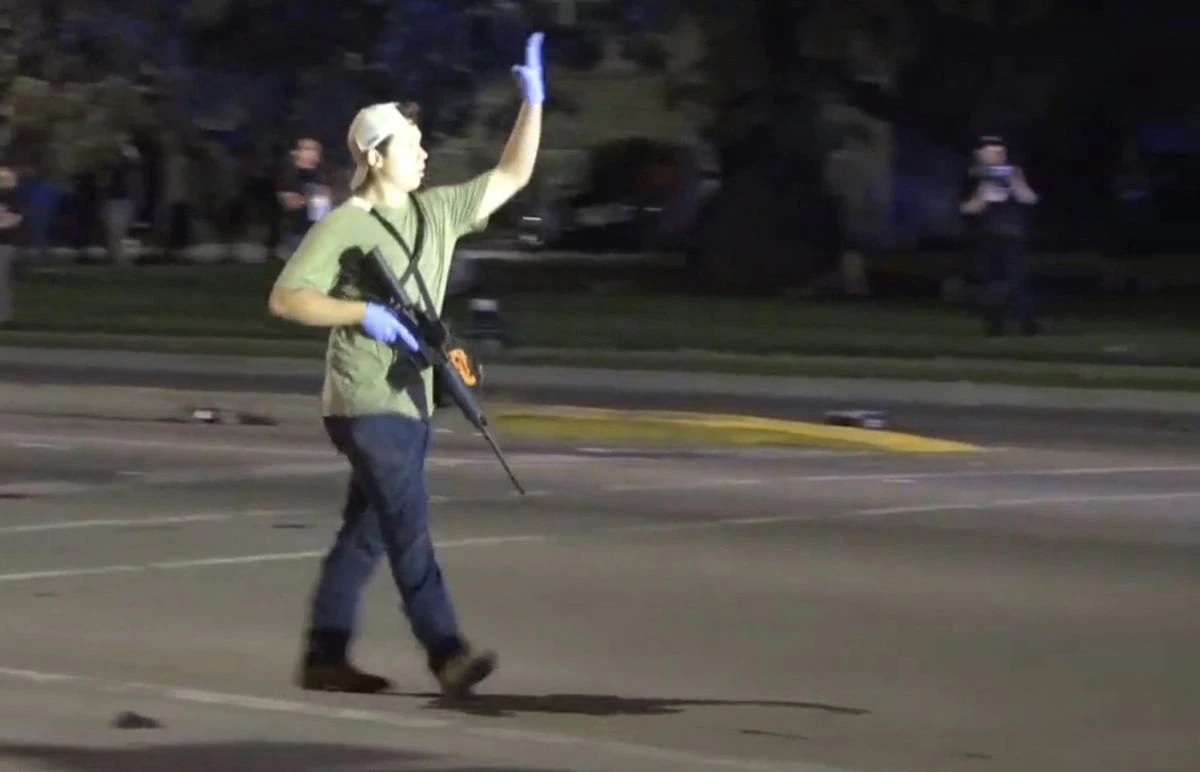 I've become something of a well known loudmouth on my Facebook page and I hope to make this website an extension of that. I hope to spread a little bit of wisdom, humor and my take on the days events.

Let's start off with the important stuff, fear. This country has become a nation of fucking pussies, the biggest lesson of life is to never be scared of anyone or anything.

But it seems that these days everybody is running around scared shitless of every little thing, well cut it the fuck out. Grow a set America and remember what made this country great, we used to stand up and spit in the eye of anyone who tried to push us around.

Well it's time we got back to that way of thinking in my opinion.

Take Kyle Rittenhouse for instance. That kid is a 100 times more of a real man than almost anybody I know today.

Did he bend over and take it up the old poop shoot when a few hundred commie, hippy scum came after him last year? Hell no, he started wackin' and stackin' them thugs!

And when the stupid fucks in the DAs office rolled over on their backs and started pissing all over themselves when Nancy Pelosi, Chuck Schumer and those dumb broads of "The Squad" demanded a pound of flesh, did Kyle roll over too? Did he beg for mercy and cop a plea?

FUCK NO! Kyle knew he was innocent and he stood his ground and fought back. He and his lawyers refused to bow down to those "woke folk" and stood up and spit in the eye of those motherfuckers!

Hey, America! Take a lesson from that kid. Grow a set and stand up for yourself. 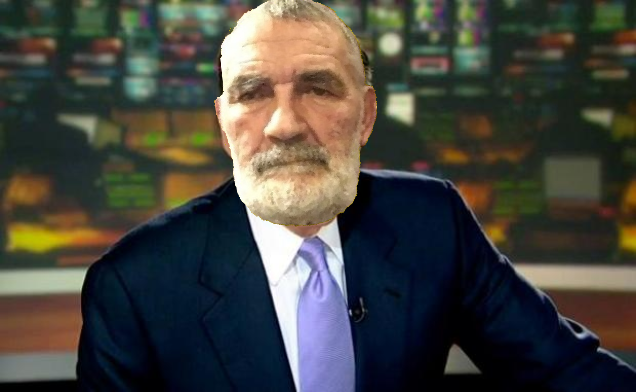